I think back to that moment: a moment of relief, a feeling of accomplishment.  Follow-thru was second nature: feeling the trigger break, gaining sight picture after the recoil, working the action, searching to acquire the target in case a follow-up shot is necessary.  I hear, “He’s hit,” from Nile, and Roger, “Just to the left.  See where he was, five yards to the left.  There he goes, rolling to the left”.  There’s no need for the second shot, our ram is down; our Stone’s sheep is down.  I was nearly in disbelief.

I didn’t realize it at the time, but my North American Grand Slam journey started in August, 2015, being guided by Cabot Pitts for a Dall’s sheep in the Brooks Range of Alaska.  Cabot encouraged me to join the Wild Sheep Foundation and attend the Sheep Show in Reno, Nevada.  Fast forward to January, 2016, during the Sheep Show, at a ‘moment of weakness’, I signed up for an August, 2018, Stone’s sheep hunt with Collingwood Bros Outfitters.

There were many hurdles to get over: financial, mental, and physical.  It is on target to say that my Stone’s sheep hunt started at the Sheep Show in January, 2016 – not August, 2018, as one may think.  When your sleeping bag weighed eleven pounds (yes eleven!) on your first sheep hunt, you quickly learn your gear has to be different for a mountain hunt than for a back-forty whitetail hunt.  I changed my tent, sleeping bag, rain pants, bullets, backpack, rifle scope, binoculars, insulation layers, etc.  In addition to getting in ‘sheep shape’, my physical training routine integrated exercises that provided an insurance policy against hurting my back again.  I thru my back out on the first day of my Dall’s sheep hunt.  I didn’t want my lower-back turning a ‘once in a lifetime hunt’ into an expensive camping trip!  The mental stress stems from the financial obligation one must commit to when hunting Stone’s sheep, or is it the sheep hunter that should be committed for willingly paying what we do to hunt a Stone’s sheep?!  Don’t answer that; back to the story.  Not leaving anything to chance, I attended the Long Range Hunter course by Ron and Denise White of DR Long Range Concepts in Seneca, Missouri.  I was ready for whatever may come during the ten-day hunt.  Excited as a kid during their first deer season, final hugs to my family, I was off to Minneapolis-St Paul International Airport.  Within 48 hours I would be within Spatsizi Plateau Wilderness Provincial Park hunting Stone’s sheep!

Once in Smithers, British Columbia, it was a relief to know my gear made it without a hitch.  Wendy, a Collingwood Bros expeditor, picked us up and provided transportation to the Hudson Bay Lodge.  Two other gentlemen, John and Gary, would be hunting Stone’s sheep during the same time period.  John, Gary, and I had a relaxing evening discussing prior experiences and our dreams of what may transpire over the next 14 days.  Before hitting the rack, I must have triple checked and triple packed again.  I wanted to make sure I had everything before leaving for the float plane in the morning.  There wasn’t a store where we were going.

Wendel, owner of Alpine Lakes Air, flew us into the secret location base camp the next morning.  The couple hour flight provided more time to dream and visually get acquainted with Spatsizi, land of the red goat.  Once at basecamp, we were greeted by the guides, wranglers, Bundy the dog, and two successful sheep hunters, Jim and Matt of California.  After unloading and reloading the DHC-3T Turbo Otter, being in British Columbia hunting Stone’s sheep hit me.  How many people know what a Stone’s sheep is, let alone experience their home range of northern British Columbia?  The day was spent getting acquainted with the crew, the horses, fitting stir-ups, double checking rifle zero, and enjoying Esther’s cooking.  Each meal at base camp felt like a holiday meal:  you had to try a little of everything, it was always good, and of course you ate too much.  I wasn’t so sure I was going to lose any weight on this trip!  The campfire was a good end to the day.

The following morning, after a good sleep in one of the log cabin accommodations, we loaded up the horses and started our nine hour ride to spike camp.  I was riding Babe, a robust Canadian mountain draft horse that had two gears –  too slow and trot.  That day I learned what saddle-sore means and why cowboys walk the way they do in cartoons!  My knees were grateful the ride in was over.  It took the day to finalize stir-up height and learn how to adjust your feet as the willows tug and twist on them.  We made it to spike camp before dark, allowing us to settle in and start glassing.  Mountain goats were visible from camp, but no sheep yet.

Up at 6AM and on the horses by 730AM after filling up on pancakes and moose sausage.  After two hours, the horses had taken us to tree line.  We stalked to the top where we were able to glass up eight goats and three sheep.  The rams were sky-lined about one mile away, evading bugs by catching the morning breeze.  We couldn’t tell if the largest was legal from this distance, but he was intriguing.  A legal Stone’s sheep in British Columbia is at least eight years old or the tips of the horns curl past the bridge of the nose.  Stalking on either side of the ridgeline, I was thinking that these mountains aren’t like the Brooks Range.  At one point we were straddling the knife-edge; this really plays tricks on your brain.  You have to focus your vision at your feet and not the bottom of the mountain.  I realized why some people tease that the Brooks Range is where sheep hunters go to retire.  Mid-day we came to a small grassy bowl that afforded us a hiding place to take a break and eat lunch.  During lunch, a spent, tarnished, 30.06 case from a previous hunter revealed itself on the ground.  I took it as a sign we were on the right mountain.

One thousand yards out – the ram, bedded on a grass ledge, started to look legal.  One has to error on the side of caution and not let your greed make a poor choice of legality on a sheep.  Four hundred yards out – we confirm the ram is legal; for sure eight years old and tips of his horns were past the bridge of his nose.  A handsome ram for sure.  Roger asked me if I liked him enough to continue the pursuit.  I couldn’t believe it.  Any legal Stone’s sheep is more than okay with me as I felt humbled and fortunate just to be on the adventure.  Two hundred yards out – we set up in a comfortable shooting position.  There wasn’t enough wind to matter at this range.  I trained the center of the crosshairs to line up behind his shoulder when he stood; the wait began. 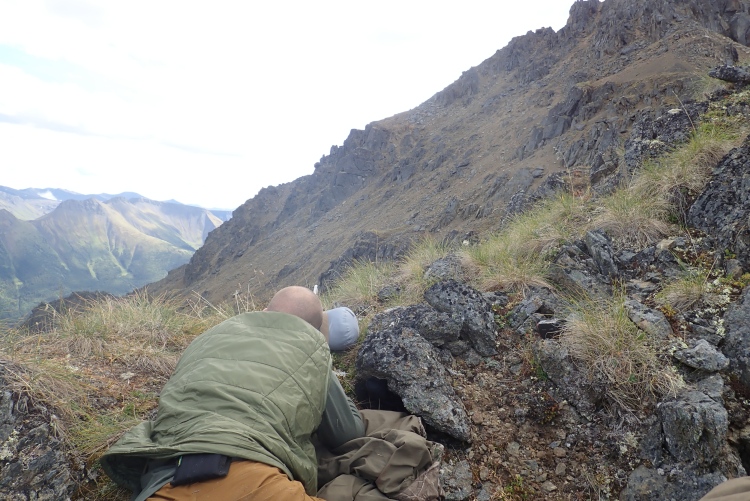 The ram was bedded since late morning; now late afternoon.  How much longer would he stay comfortable, ‘til he gets up to feed?  Roger tells me to take my rifle off of safe and be ready.  I could hear Roger willing the ram to stand: “Stand up, come on, stand up”.  A few minutes later our ram stood.  In that second, my Hill Country Rifle in .280AI and the 162gr Hornady ELD-X connected the ram and I. 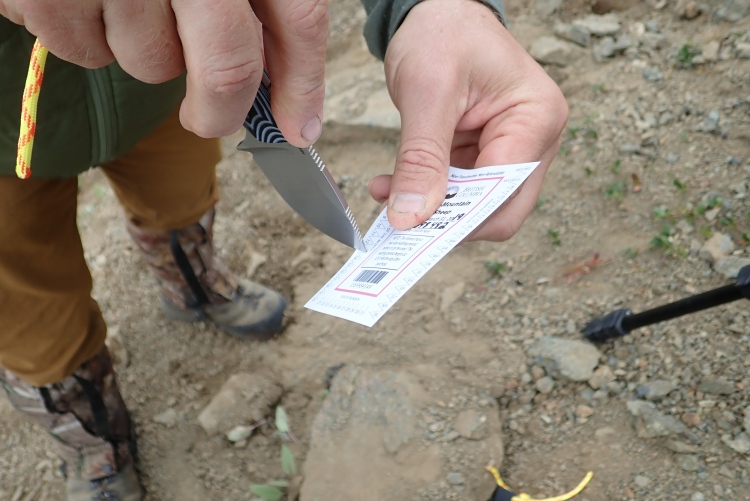 Two years and six months had passed since the first day of this adventure.  At that moment, many questions were running through my mind.  What had this hunt taught me?  What was I expecting from it?  What meaning did it give me?  Did I want a Grand Slam?  What is the pull to spend the money, obtain the gear, get educated enough to travel across borders with hunting tools, to stay in physical shape, sacrifice time with family???  It is our passion.

“We need to understand the passionate, for it is in the passions that people achieve their highest potential of being human.” – James Swan 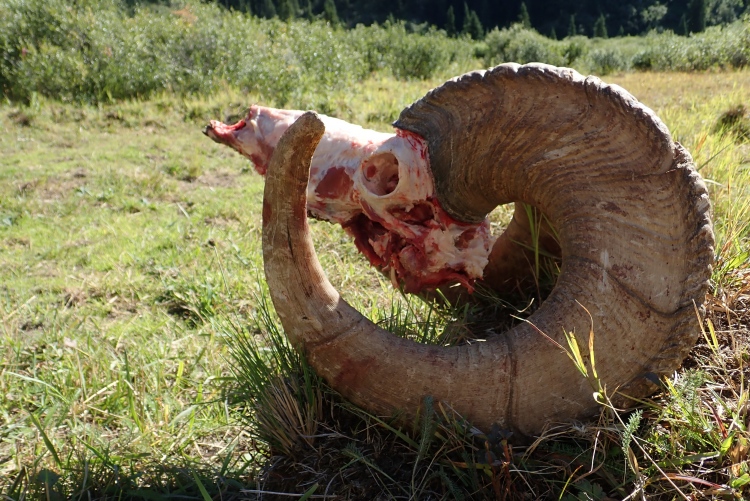 I would like to thank many people for helping me on this journey, but there isn’t enough printed space to name them all.  The following are the key people who helped make this adventure a success:  my wife Donna; Cabot Pitts, Kevin Muir, and Matt DeFrank for guidance before the trip; Reg Collingwood for running the best hunting camp in British Columbia; and finally Roger Oler and Nile Sinnes for guidance during the trip.

The wolves were let out one more time as I still had a mountain goat tag in my pocket, but that story is for another time.